So what are “microgreens” anyway?

If you were at last week’s Opening Day, you surely noticed one of our new vendors, Mini Manna Farms, selling containers filled with tiny sprout-like greens.  These are actually not sprouts, but are just beyond the sprout stage, at the point in which the plant develops its first true set of leaves.  Microgreens tend to have a stronger, more concentrated flavor of the original vegetable, and they have increased in popularity due to research indicating that they have up to 40 times the nutrients of their mature plant.

Here’s a great omelet recipe from MarthaStewart.com— of course, you’d want to use some of MeadowSong Farm’s eggs, and you could add some of Ohio Farm Direct’s cheese for a twist!   Also, consider adding them to your salads, sandwiches, and soups this weekend.  They are delicious on Frickaccio’s Jalapeno Cheddar Bread with a spread of cream cheese and some fresh dill! 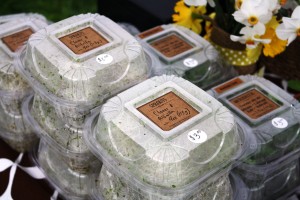 1.  Heat half the butter in a small nonstick skillet over medium-high heat. Cook mushrooms, undisturbed, until they begin to release their liquid, about 2 minutes; season with salt and pepper, and stir. Cook until golden brown, about 2 minutes more. Transfer mushrooms to a small bowl; stir in microgreens.

2.  Whisk eggs in a medium bowl until well combined; season with salt and pepper. Wipe skillet clean with paper towels. Melt remaining butter over medium heat, swirling to coat bottom of pan. Pour eggs into skillet, and cook, undisturbed, until edges are set slightly. With a heatproof flexible spatula, push eggs from edge toward center, tilting pan to let uncooked eggs run underneath, until omelet is just set, 1 to 2 minutes. Place mushroom filling on 1 side of omelet. Using spatula, gently fold other side of omelet over filling. Serve immediately.